I am using SQLCMD to deploy a set of scripted Agent jobs. I am running these with a SQLCMD script to calls each script using the :r syntax.

Is there anyway to disable variable substitution with these scripts (equivalent of the /x switch for SQLCMD)?

I want to run Script1.sql, Script2.sql, etc… without variable substitution.

I think I understand the problem. Your SQL Agent scripts have sqlcmd variables in them which you do not want to set whilst deploying the scripts, only when the job runs. I imagine you have a job step like this for example: 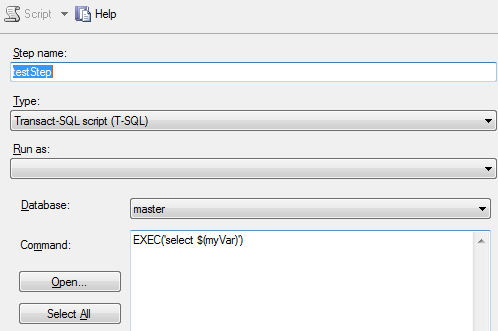 When you run the script you receive an error saying the variable is not defined, eg

There are a couple of workarounds for this.

Basically you are just replacing the :r for a !!sqlcmd and it should work.

If you want to do the same thing that you are attempting to do within Management Studio, I think the simplest approach is to write a very simple PowerShell script to run the same thing that goes through each file and then executes the file with SQL CMD.

In my example, I have a directory named e:test. I have a few .sql files in that directory and I want to execute them and disable variable substitution. To do that I would use the following script within powershell:

This obviously takes you out of Management Studio, but it should accomplish the task fairly easily and do so with variable substitution being disabled.