Closed. This question is off-topic. It is not currently accepting answers.

Want to improve this question? Update the question so it’s on-topic for Database Administrators Stack Exchange.

We have an hard-to-understand issue with our production MySQL RDS 8.0.20 instance. It’s db.r5.2xlarge instance, Ireland region, Multi-AZ, besides, there is a Replica.

So what we see, is that this exact COMMIT sql takes lots of time.
Literally, in our slow query logs, we see 10s or 20s COMMITs.
To put it simply: selects, inserts, updates go fast, COMMITs are stuck.
Once an hour, at :00.

Dears, thank you for helping, attaching more info for visibility and also some more research results.

We were checking 20 minutes after the glitch, 2 mins before the glitch etc. All the times change_buffer_page_percentage is less than 0.5

Avg Queue Size had a big spike, Disk IO Util jumped to 100%, Disk IO Await had a spike.
( the biggest spikes were around 09:00:40 utc time )
The interesting thing to note that there were no spikes in TPS, Read Kb/s, Write Kb/s, Read IO/s, Write IO/s.
Physical Disk IO metrics didn’t have any spikes.
CPU Total maximum value was around 60, CPU Idle minimum value was around 40. 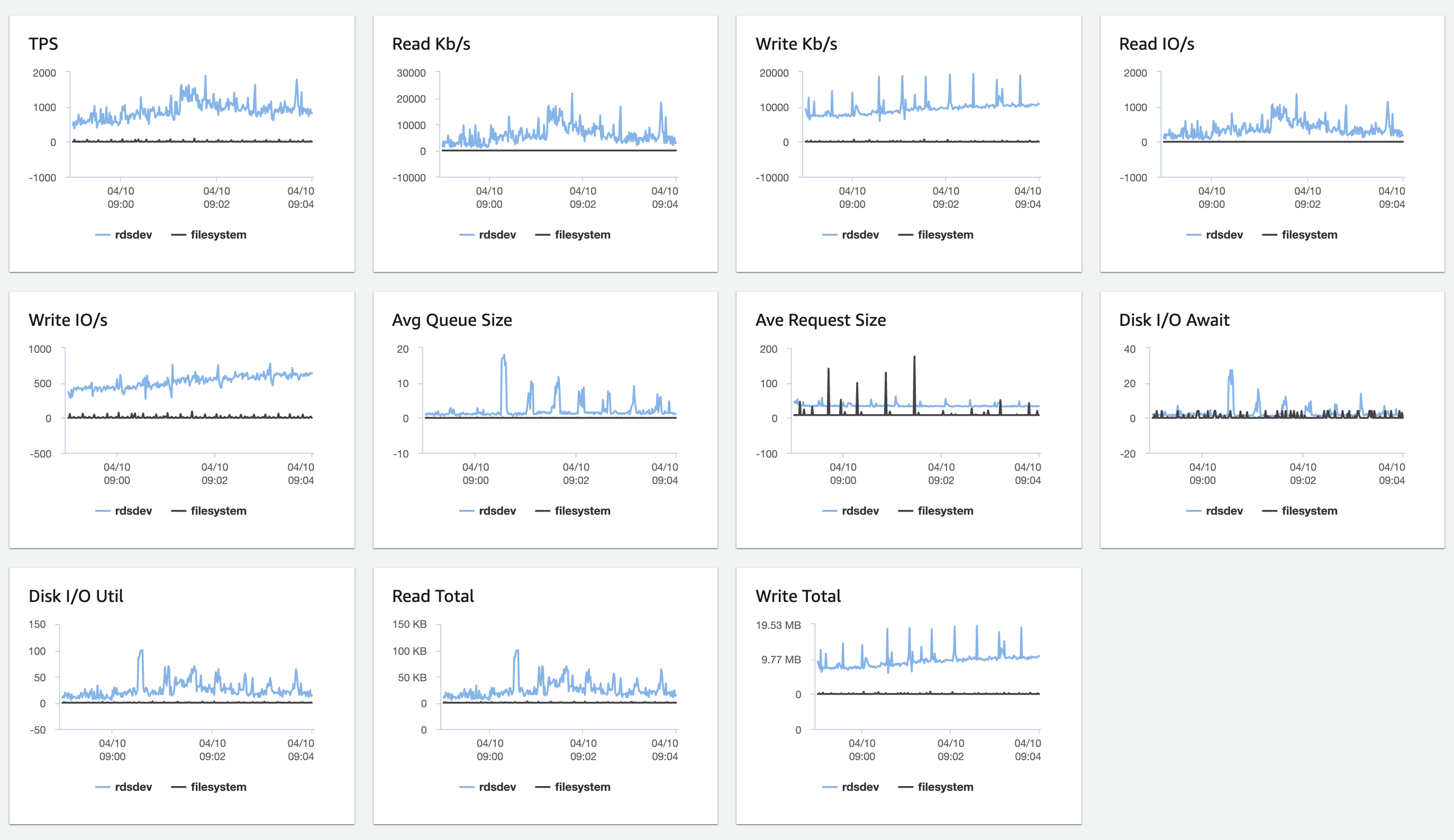 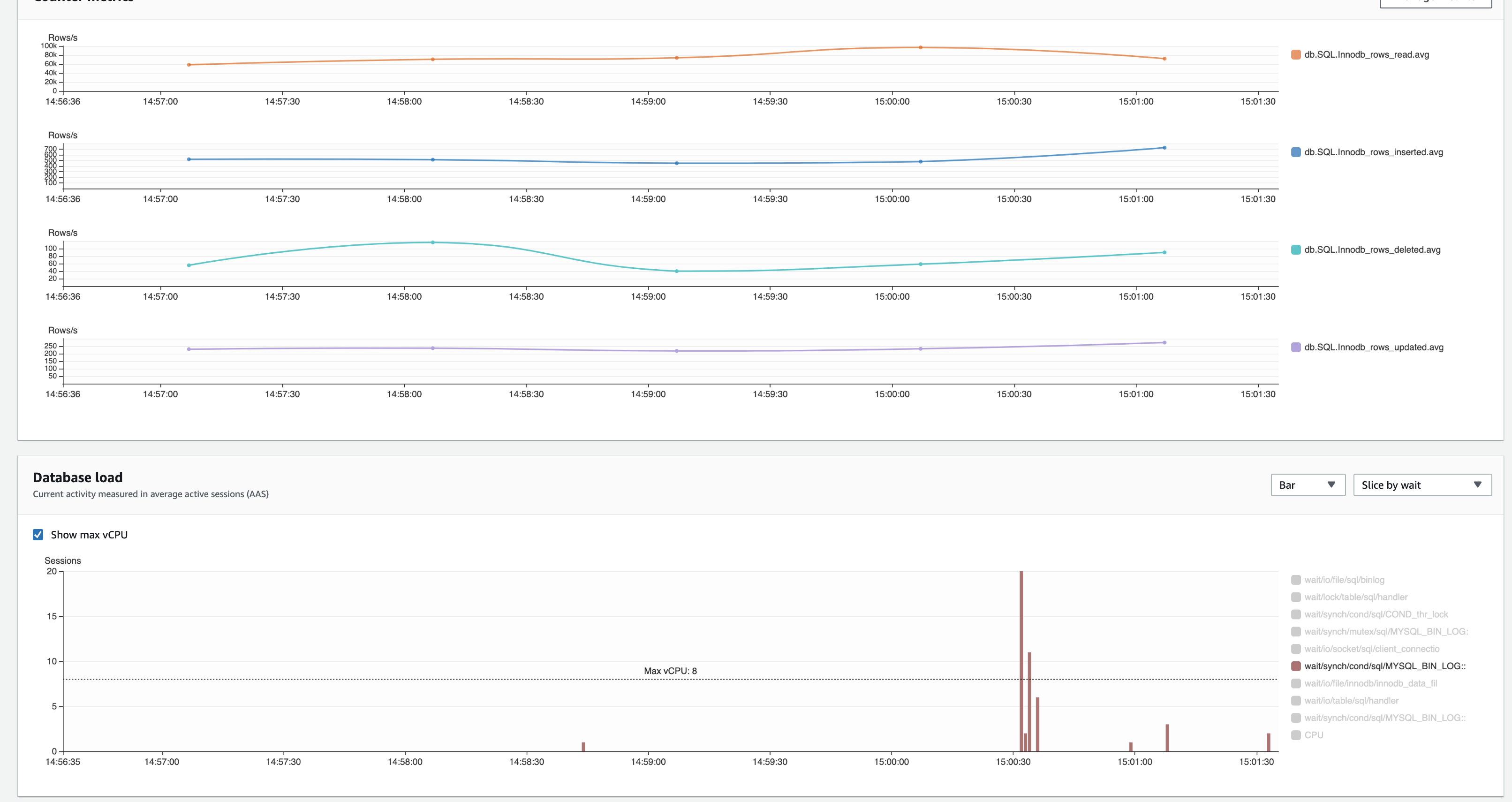 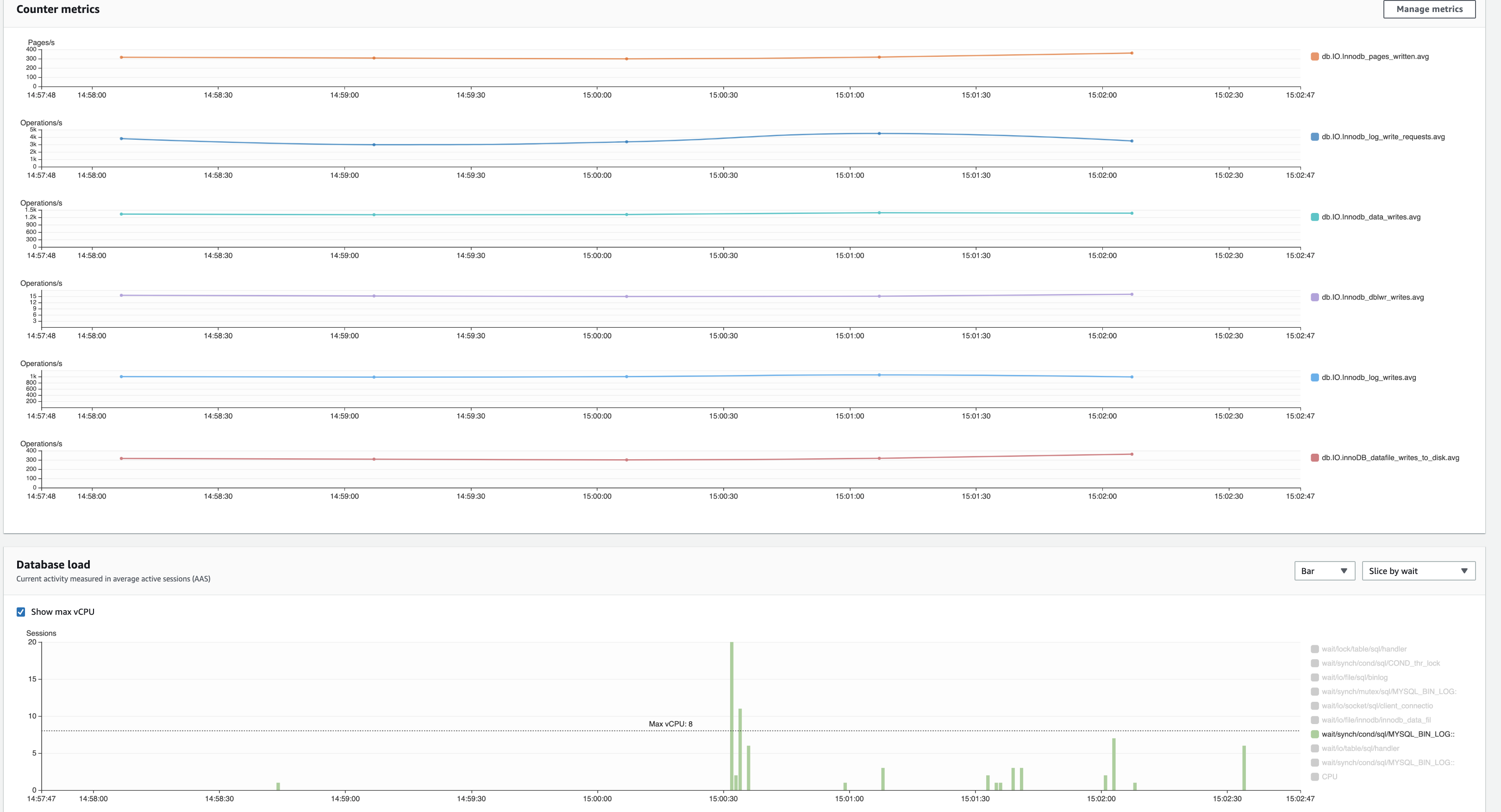 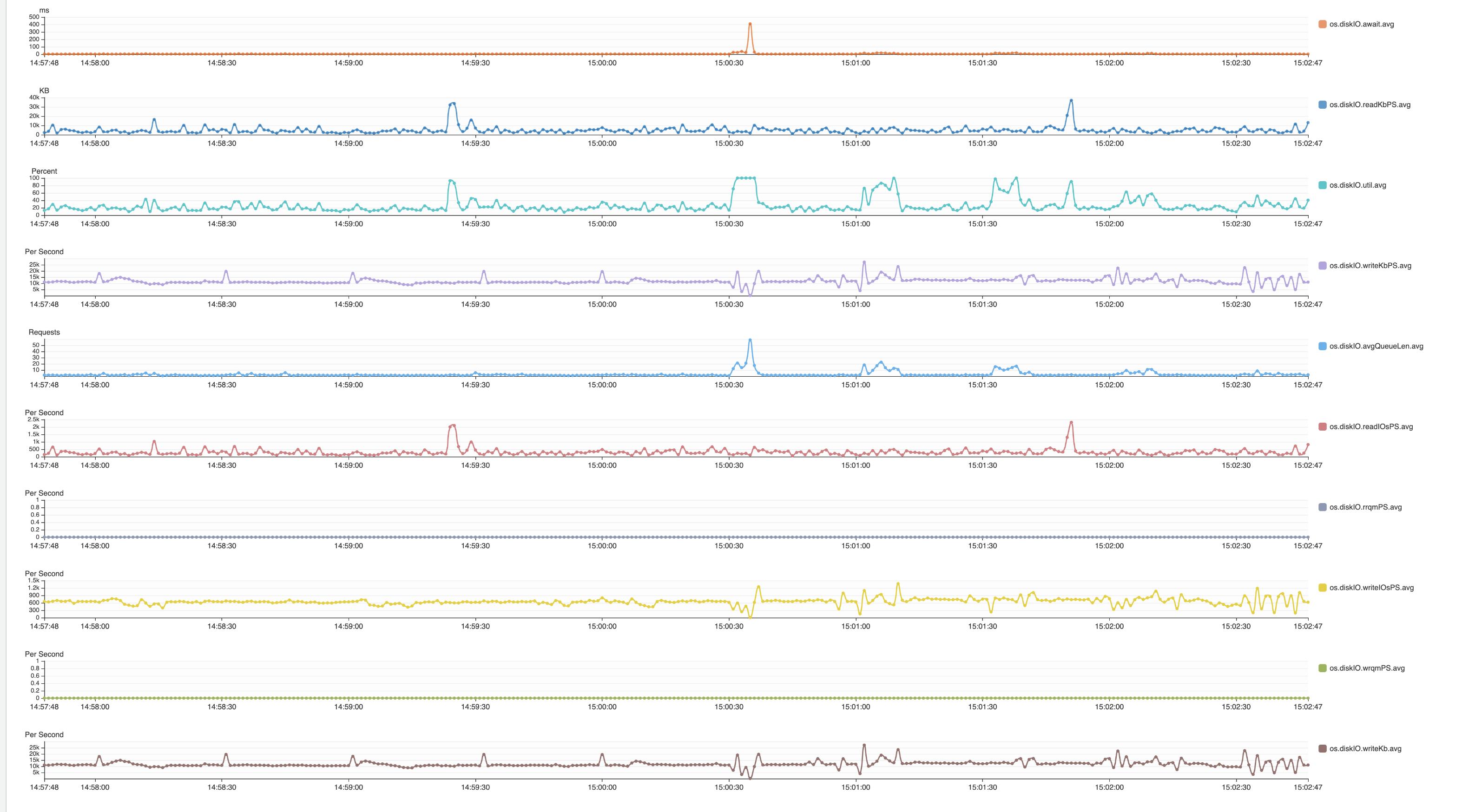 At 09:00:31 – the issue is not yet happening ( or maybe, just starting to happen? ). There is no transactions stuck, but SEMAPHORE section looks a bit suspicious, it looks like there is a contention.
https://pastebin.com/amK4L789

At 09:00:32 – here we already have an issue.
You can clearly see that there are lots of transactions in “commit” state.
This is the glitch.
https://pastebin.com/NgTUzkqc

P.S I have lots of these “show engine innodb status”.
Starting from 08:55 ( i.e. 5 mins before the glitch ) and possibly ending 5 minutes after the glitch, I can attach more if needed.

The issue is still happening, we are looking to make restart-required changes on the weekends at night.
At this moment, we have changed dynamic configuration for innodb_change_buffering and we disabled it, i.e. set it to none.
This was suggestion by AWS.
Didn’t help.

As most of these parameters require restart, we will apply them during the weekend ( innodb_thread_concurrency is already inifnite ):

This is on rds. Probably shared Infra structure. The problem might be a busy neighbor.

An other application that shares your infra might have an hourly procedure that steals your io causing your app a delay.

At exactly :00, do SHOW FULL PROCESSLIST;. You might prep for it by connecting as root just before the top of the hour.

Once you have the list of queries running, provide them, plus SHOW CREATE TABLE for the tables in question.

It sounds like you have a cron job or an EVENT that is being naughty and needs to be improved.

Multiple COMMITs? Are they from different connections? Or explicit COMMITs after each query? Find the queries in the source code. A COMMIT may take a “long time” because of some cleanup work that happens then.

Is Replication / Clustering involved? If so, other causes come to mind.

Was a deadlock listed in the SHOW ENGINE InnoDB STATUS? It is usually worth looking into, even if it is unrelated to the target problem.

If you provide GLOBAL STATUS and VARIABLES, something may show up: http://mysql.rjweb.org/doc.php/mysql_analysis#tuning

Other observations,
SHOW GLOBAL STATUS reports
com_begin count did not increase in this one minute
com_commit count increased by 128838 – usually these numbers closer to paired
com_stmt_prepare count usually is close to com_stmt_close at 151 days
almost half have not closed to release resources.
SHOW ENGINE INNODB STATUS report includes
‘not gap waiting’ for a specific table – OPTIMIZE TABLE tbl_name may avoid this issue for this one table.

Providing additional requested Apr 8, 2021 at 21:02 would allow more in depth analysis of your instance performance. One set of SHOW GLOBAL VARIABLES; would be MOST helpful and 400 lines of slow query log from first minute of any hour would be useful.

Originally self-answered in the question body:

The problem was in the Secondary Disk, i.e. Multi-AZ.

Solution was to switch off Multi-AZ and then enable again.

This changed the Secondary Disk, actual hardware and the problem disappeared.

To my regret, AWS Support failed to identify the problem.

MySQL internal team even sent a response something like: it’s in your application, work with your DBA. Quite a BAD job from their side.