Hi everyone and thanks in advance for your help.
We are experiencing challenges with SQL Server 2017 Availability Groups.

Company is a retail B2B back-end software. About 500 single tenant databases, and 5 shared databases used by all tenants. Workload characteristic is read mostly, and the majority of databases have very low activity.

Their requirement is for all databases to failover together, so they had to put them all in a single AG. It’s a single, non-readable synchronous replica on an identical server.

The new servers have been in production since June 2018. Latest CU (CU7 at the time) and windows updates were installed, and system was working well. About a month later, after updating the servers from CU7 to CU9, they started noticing the following challenges, listed in order of priority.

We have been monitoring the servers using SQL Sentry and observed no physical bottlenecks. All key indicators seem good. CPU is averaging 20%, IO times typically less than 1ms, RAM not fully utilized, and network <1%.

The symptoms seem to get better after failover, but come back within a few days, regardless of which server is primary – symptoms are identical on both servers.

I believe I found the smoking gun in the error logs. The error logs are full of AG messages, that are labeled as ‘informational only’, but looks like they are not normal at all, and there is a very strong correlation of their frequency to the application errors.

The errors are of several types, and come in sequences:

Some days there are 10’s of thousands of those.

This article discusses the same type of sequence of errors on SQL 2016 and there it says it is abnormal. This also explains the ‘non-synchronizing’ phenomenon after failover. The issue discussed was for 2016 and was fixed earlier this year in a CU. however, it is the only relevant reference that I could find for the first 2 types of messages, other than references to automatic initial seeding messages which should not be the case here as the AG is already established.

Here is a summary of the daily errors last week, for days that had > 10K errors per type on the PRIMARY (secondary shows ‘losing connection with primary…’):

We also occasionally see “weird” messages such as:

… among a host of changing states from “SECONDARY” to “RESOLVING”.

After manual failover, the system may go for several days without a single message of these types, and all of the sudden, for no apparent reason, we will get thousands at once, which in turn causes the server to become unresponsive, and cause application connection timeouts. This is a critical bug as some of their applications do not incorporate a retry mechanism, and therefore may lose data.
When such a burst of errors occurs, the following wait types sky-rocket. This shows the waits right after AG seems to have lost connection to all databases at once: 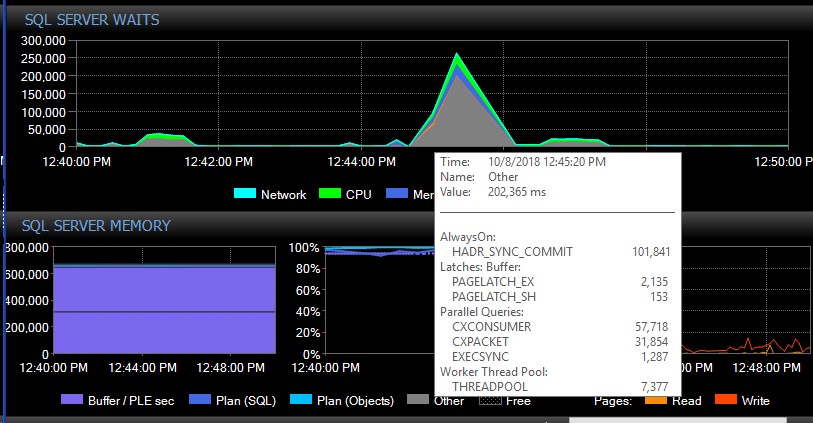 About 30 seconds later, everything goes back to normal in terms of waits, but the AG messages keep flooding the error logs at varying rates and during different times of the day, seemingly random times including off peak hours. Concurrent increase in workload during these error bursts makes things worse of course. If only a few databases get disconnected, it typically doesn’t cause connections to time out as it is resolved quickly enough on its own.

We tried to verify that it was indeed CU9 that started the issue, but we were able to downgrade both nodes only to CU9. Attempts to downgrade either node to CU8, resulted in that node getting stuck in ‘Resolving’ state showing the same error in the log:

This means we will have to introduce down time to be able to downgrade both nodes to CU8 at the same time. This also suggests there was some major update to AG which may explain what we are experiencing.

We already tried adjusting the max_worker_threads from it’s default of 0 (=960 on our box based on this article) gradually up to 2,000 with no observed impact on the errors.

What can we do to solve these AG disconnects?
Is anyone out there experiencing similar issues?
Can other people with large number of databases in an AG perhaps see similar messages in the SQL error log starting with CU9 or CU8?

Thanks in advance for any help!

Did you check the worker threads? Normally always on use more workers thread to work and nornally the default value is not sufficient. I had the same issue with 600 databases in an always on, So we add more threads on the instance paramater and that fixed our issue.
Hope this helps!