Windows Task Manager says that we have two sockets and 8 virtual cores. This number corresponds with the actual hardware beneath the guest.

In Task Manager I also can’t change the view to NUMA nodes.

In SQL Server still only one NUMA node to see 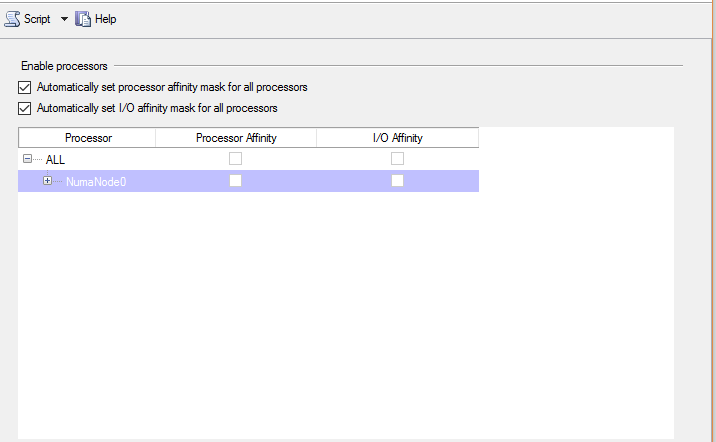 From all this information i can suspect that we are running on only one NUMA node but across two sockets.

I think there is a lot of misinformation out there about NUMA nodes. If someone can answer my question or point to a useful resource that explains this concept in detail that would be really appreciated.

The following two articles make it clear that VMware will present a virtual NUMA configuration to the guest OS that is optimal. Accordingly, the number of sockets that are configured on the VM are more or less irrelevant as to the number of NUMA nodes. If the actual hardware has at least 8 cores in a NUMA node, then VMware is only going to present one NUMA node to a guest that has 8 CPUs, regardless of the VM’s socket count.

Determining NUMA node boundaries for modern CPUs contains two helpful quotes that show that, even on hardware, number of sockets is not always equal to number of NUMA nodes:

When we originally did this analysis, the common multi-core processors were dual core or at most quad core. On these chips, the hardware manufacturers divided the NUMA boundaries into cores, rather than sockets. But it appears that that configuration is not the same for the larger multi-core (6, 12, etc.) chips.

In short, don’t assume that your NUMA boundaries are divided into cores – it very much depends on your specific CPU architecture.

I also ran across an TechNet article,Soft-NUMA (SQL Server), stating that each socket is usually represented by one NUMA node, but it doesn’t explain when it wouldn’t be.

You also might check the BIOS of the hardware to ensure that NUMA is enabled. I would be surprised if it was disabled, but I’ve learned through my career to never assume that someone didn’t do something completely irrational.

Answers to your questions: