When applying the UNPIVOT function to data that is not normalized, SQL Server requires that the datatype and length be the same. I understand why the datatype must be the same but why does UNPIVOT require the length to be the same?

Let’s say that I have the following sample data that I need to unpivot:

If I attempt to UNPIVOT the Firstname and Lastname columns similar to:

The type of column “Lastname” conflicts with the type of other columns specified in the UNPIVOT list.

In order to resolve the error, we must use a subquery to first cast the Lastname column to have the same length as Firstname:

Prior to UNPIVOT being introduced in SQL Server 2005, I would use a SELECT with UNION ALL to unpivot the firstname/lastname columns and the query would run without the need to convert the columns to the same length:

We are also able to successfully unpivot the data using CROSS APPLY without having the same length on the datatype:

I have read through MSDN but I didn’t find anything explaining the reasoning for forcing the length on the datatype to be the same.

What is the logic behind requiring the same length when using UNPIVOT?

What is the logic behind requiring the same length when using UNPIVOT?

This question may only be truly answerable by the people who worked on the implementation of UNPIVOT. You might be able to obtain this by contacting them for support. The following is my understanding of the reasoning, which may not be 100% accurate:

T-SQL contains any number of instances of weird semantics and other counter-intuitive behaviours. Some of these will eventually go away as part of deprecation cycles, but others may never be ‘improved’ or ‘fixed’. Quite aside from anything else, applications exist that depend on these behaviours, so backward compatibility has to be preserved.

The rules for implicit conversions, and expression type derivation account for a significant proportion of the weirdness mentioned above. I do not envy the testers who have to ensure that the weird (and often undocumented) behaviours are preserved (under all combinations of SET session values and so on) for new versions.

That said, there is no good reason not to make improvements, and avoid past mistakes, when introducing new language features (with obviously no backward compatibility baggage). New features like recursive common table expressions (as mentioned by Andriy M in a comment) and UNPIVOT were free to have relatively sane semantics and clearly-defined rules.

There will be a range of views as to whether including the length in the type is taking explicit typing too far, but personally I welcome it. In my view, the types varchar(25) and varchar(50) are not the same, any more than decimal(8) and decimal(10) are. Special casing string type conversion complicates things unnecessarily and adds no real value, in my opinion.

One could argue that only implicit conversions that might lose data should be required to be explicitly stated, but there are edge-cases there too. Ultimately, a conversion is going to be needed, so we might as well make it explicit.

If the implicit conversion from varchar(25) to varchar(50) were allowed, it would just be another (most likely hidden) implicit conversion, with all the usual weird edge cases and SET setting sensitivities. Why not make the implementation the simplest and most explicit possible? (Nothing is perfect, however, and it is a shame that hiding varchar(25) and varchar(50) inside a sql_variant is allowed.)

Rewriting the UNPIVOT with APPLY and UNION ALL avoids the (better) type behaviour because the rules for UNION are subject to backward compatibility, and are documented in Books Online as allowing different types so long as they are comparable using implicit conversion (for which the arcane rules of data type precedence are used, and so on).

The workaround involves being explicit about the data types and adding explicit conversions where necessary. This looks like progress to me 🙂

One way to write the explicitly-typed workaround:

Finally, note that the rewrite using CROSS APPLY in the question is not quite the same as the UNPIVOT, because it does not reject NULL attributes. 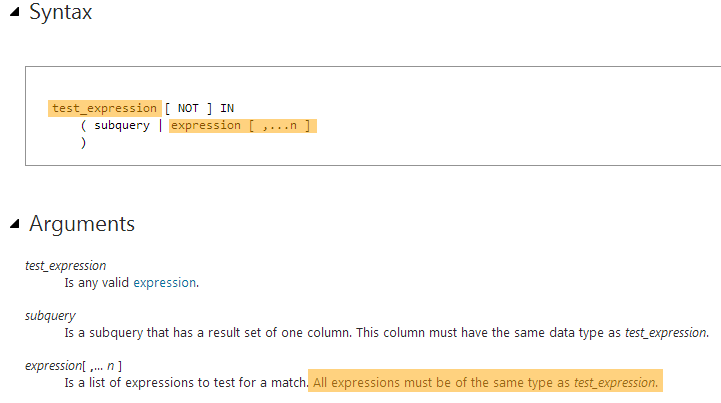